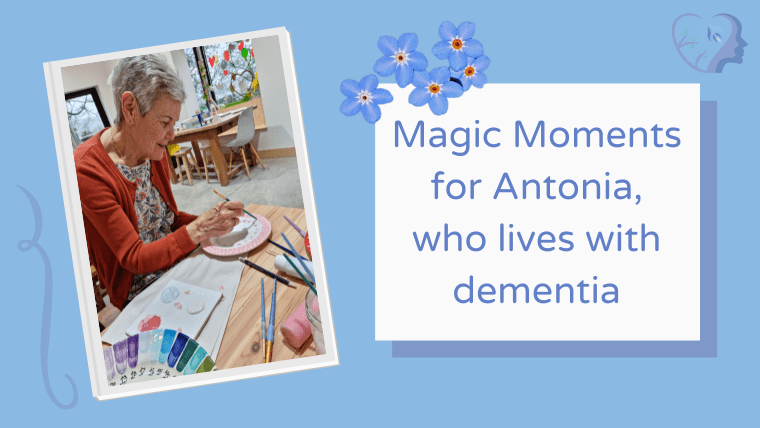 Learning about the people we work with at Ambiance Care and listening to their stories is one of our favourite parts of what we do. Our latest Magic Moment blog post focuses on our client Antonia, originally from the Canary Islands, who lives with dementia in Bramhall.

Born in Tenerife, Antonia grew up on her grandparents’ banana plantation and went to school at a Catholic convent. As an adult, Antonia enjoyed traditional dancing and met her English husband during a dance one evening in 1959.

Instantly smitten, Frank – a travel agent – was due to fly back to the UK soon after the pair met. As fate would have it, Frank’s plane was delayed, and he popped into the shoe shop opposite his hotel to buy some cufflinks, only to discover that Antonia worked there!

The pair exchanged addresses and wrote often – Frank even sent over a vinyl record of Nat King Cole’s When I Fall in Love, which became the couple’s song.

A couple of years later the pair married and moved to Sheffield, going on to have three daughters. As time went by, and Frank grew unwell, Antonia cared for him with patience and love. Thanks to some regular respite from one of their daughters, Antonia was able to continue going to church and to her art class.

After her husband’s death, Antonia moved to Bramhall to be closer to her daughter Erika, finding the village pleasant and easy to get around. She was diagnosed with dementia around the start of lockdown in 2020, and we were enlisted by Erika to provide our unique style of care for her mum, enabling Antonia to keep living her best life independently for as long as possible.

Getting to know Antonia

During lockdown, Antonia wasn’t able to attend church, visit family in the UK or in the Canaries, and missed out on her regular trips out with her walking group, yet she made sure she kept busy!

Local walks, crocheting, knitting and art – Antonia has always kept herself occupied, and this is something we now help her to do. She’s always enjoyed baking and sharing her famous scones with neighbours but needs a little help now with measuring out ingredients and getting the times just right.

We often go for long walks – “hiking”, as Antonia calls it, and she loves attending the Poynton Golden Memories group once a fortnight. Painting remains a favourite pastime and recently, we took Antonia to Blaze Farm, where she enjoyed painting her own plate.

During the visit, Caroline, who runs the pottery studio, spoke with Antonia and told her about her daughter Issy, who studies Spanish at university.

On an impulse, Caroline asked us whether she could contact her daughter so the two could communicate in Spanish about Antonia’s artwork. Of course we agreed!

We were unsure how well the pair would be able to communicate, with Antonia having lived in the UK for so long, and with progressing dementia, but just take a look at the video below to see the remarkable translation Antonia gave us when reading Issy’s message.

Despite her memory difficulties, Antonia was able to process the message and switch between Spanish and English easily – an amazing achievement. We were so grateful to Caroline and Issy for their spontaneous gesture, creating a truly Magical Moment for Antonia. We’re looking forward to returning for another session in the near future!

For dementia care services at home in Bramhall and the wider Stockport area, call our caring team on 0161 537 0983 or email us at enquiries@ambiancecare.co.uk.